There are a lot of organizations out there that just don’t understand the difference between a good sales rep and a good sales leader. And, in a way, I think we can blame the idea of the corporate ladder.

Let’s say you’ve got an awesome clerical worker. They’re not super socially intelligent, but they are very organized and balance a checkbook like a champ. They are great at their job, so they get promoted up the corporate ladder to a management position. They don’t know how to manage a team, so they go from being an amazing clerical worker to a mediocre middle management member.

They were promoted up to the point of their own incompetence.
In the same way, a great sales rep may not be cut out to be a great leader, and a great leader may not always be found among the #1 performers. It’s a common mistake when building a sales team, but one you can avoid.

So, how can you tell the difference?

Here’s the mantra of a top-performing sales rep: “How can I make the most money in the least amount of time possible?”

Sometimes this leads folk to characterize salespeople as lazy… but it’s not a bad thing. It makes sense: that’s how salespeople make money. It’s how they make money for the company they work for. It’s logical. They want the best results as efficiently as possible.

What does that mean? Well, they want a streamlined process in order to maximize their ratio of dollars won vs. time spent.

So when a sales rep thinks along these lines, it makes them (by necessity) think more in the short term. For example: when given the choice between working in the field and attending a sales training session, a great salesperson will usually choose to work. Sure, training could be helpful eventually. But eventually doesn’t pay their bills or get them to their goals.
Great sales reps are great hunters. And hunters don’t put meat on the table by constantly worrying about their process. They want to go out and kill the biggest thing they can that day.

Great salespeople care about short-term incentives. It’s what motivates them. They want to spend as much time in the field as possible, in the best territory possible, with the best tools possible to help them secure more sales faster.

These are amazing traits for revenue creators in your company to have… but they may not be the best characteristics of a leader.

A sales leader is an entirely different animal than the sales rep.

A sales leader may have to put in extra hours doing things, (like training,) that don’t generate immediate revenue for their organization. But since it improves the profitability of their team in the long run, it’s totally worth it.
Where the sales rep is the short-term hunter looking for the biggest kill, a great sales leader is a good farmer. They research what crops bring forth the best harvest, and they spend time sowing and weeding and nurturing a team, so that the team can continue to bear more and more fruit.

Leaders are motivated not by short-term incentives… but rather by ideas, innovation, and growth. They don’t punch a clock, go home, and leave work at work; they’re always thinking about the next steps for growth and how to keep building a better team. If they have a team with 3 reps that is generating 50 sales a month, that sales leader is spending their evenings trying to figure out how to grow that to a team of 5 reps that can generate 150 sales a month.

This long-term view is different from a sales rep’s short-term view, but it’s just as critical. An organization needs someone at the helm that can see where the team is heading, take responsibility, and drive the team toward those goals with vision and purpose.

A Place For Both

Every organization needs hungry, motivated sales reps that want to go out and make as much money in as little time as possible. They also need thoughtful, self-sacrificing leaders who can maximize the productivity of a group of talented salespeople.

The key is not to confuse the two.

Don’t take an amazing sales rep and force them into the mold of a leader. The team will not get the leadership it needs, and the sales rep in question will be drained pretty quickly.

Keep great sales reps happy by empowering them to make more money. Build more short-term incentives.  Recognize their talents of hunting and winning on a daily basis to keep them hungry and motivated for the next day.

In the same way, if you’ve got a natural leader on your sales team, don’t starve them of opportunities to lead. If you’ve got someone on your team with obvious talent and a good work ethic and a keen eye for long-term development, don’t be discouraged if they aren’t on the top of the leaderboard every week. Give them the opportunities to thrive in training roles or other leadership positions where they can use their perspectives to help the whole team become more productive.

Build a culture that motivates both roles, and you’ll set the foundation for your future success.At Solcomm, we understand the importance of building a team that thrives. From rewarding compensation plans to encouraging and nurturing opportunities for advancement into leadership positions, we are all about empowering direct sales leaders to impact their communities.

If you want to take the world of Telecom direct sales by storm and are interested in starting your own direct sales team, we’d love to talk to you about becoming a Solcomm subdealer. 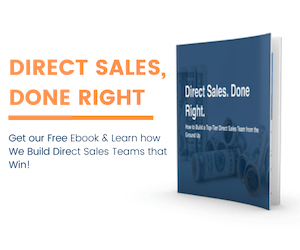